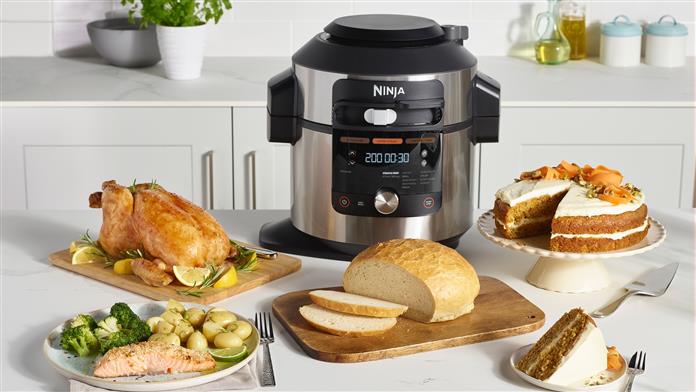 Having already reviewed the similarly-styled Sage Fast Slow Go which had its plus and minus points, I didn’t expect much difference from the Ninja. But I was wrong. This rotund beast is a multi-faceted monster that not only meets all the criteria of an ‚instant pot‘ – or ‚Instant Pot-style product‘ more accurately – it also roasts meat to perfection. Not for nothing is it a high ranker in our guide to the Best Instant Pots you can buy.

Here at Ditching we’re also big fans of the even more versatile Ninja Foodi 15-in-1 SmartLid Multi-Cooker OL750, but for now, let me tell you more about the more affordable and almost exactly as good OL550UK.

In America where they like things big, there’s a larger 8 quart version called the Ninja OL701 Foodi SMART XL. At Amazon you can snap it up for $349.99. Alternatively, try Walmart ($215) if you’d prefer to stick to the 6-quart version reviewed here.

The model we’re reviewing here isn’t available in Australia so your best bet is to visit the Ninja store over there and choose a similar machine. Likewise, Harvey Norman.

What is an instant pot?

An Instant Pot is essentially a table-top multi-cooker that performs a variety of cooking methods from pressure cooking and steaming to sautéing and slow cooking. So successful have they been that other brands have, ahem, taken inspiration from Instant Pot and made their own multi-purpose cookers. Like this one for instance!

Instant Pots and their rivals are principally aimed at those who enjoy the health benefits of pressure and steam cooking, and you can read more about them in our handy guide to the Best Multi Cooker. They are also the perfect type of table-top cooker for lodgers, soloists, couples and smaller families, and are a great way to cook a variety of recipes for comparatively little outlay. They’re also a boon for creating dishes quickly and with little mess and almost zero fuss.

This Ninja, like the Instant Pot Duo Crisp + Air Fryer, goes a few steps further by including the wherewithal to air fry food with hardly any oil. So effectively you’ve got a multi-cooker and an air fryer in one unit. Instant Pot’s version requires two lids – one for pressure cooking, one for air frying. Ninja, however, has found a way to build one lid that does both. 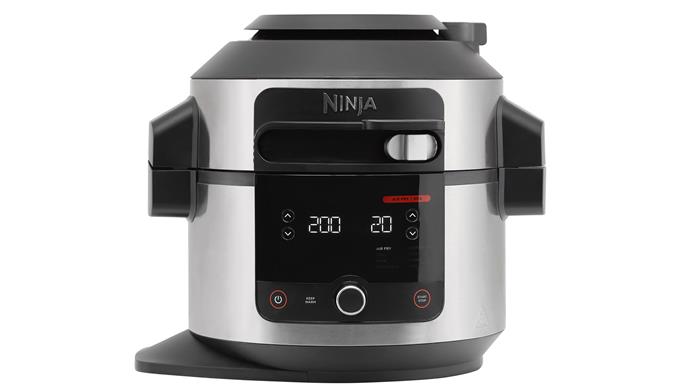 The Ninja has a 6-litre capacity (6.34 quartz) – an ideal size for singles, couples and single-kid families. At 36cm in diameter and 33cm in height, it’s pretty large but fine for even the smallest of kitchen worktops. It’s very nicely styled, too – indeed, to my mind it’s better looking than the silver-clad Sage Fast Slo Go I recently reviewed.

The Ninja Foodi 11-in-1 is one of the most versatile table-top cookers you can buy. Aside from pressure cooking, steaming and slow cooking, it can also air fry, steam fry, make steam-baked cakes and, like the Sage, produce home-made yogurt. 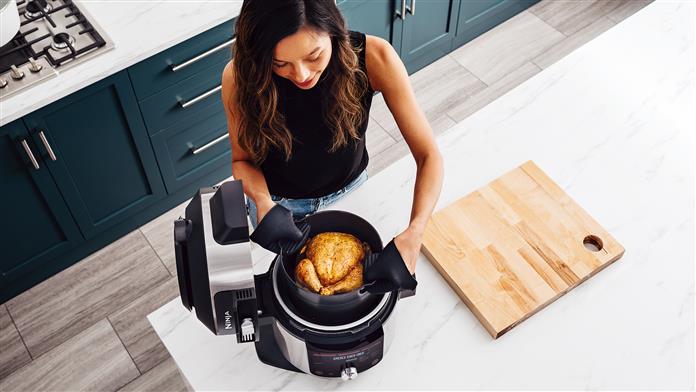 Lift the lid and you’ll see a large heating element directly underneath it. This is used for the air frying and roast settings. The removable 6-litre bowl isn’t as classy looking as the Sage’s stainless steel option but at least it’s non-stick which makes it much easier to clean. Ninja also provides a crisper bowl for the air fry function and a foldable wire rack for steaming.

The Ninja Foodi 11-in-1 has three main cooking modes which are selected by sliding the ‚SmartLid Slider‘ to one of three positions: the far left position is for pressure cooking; the centre position is for the combi-steam function; and the far right setting is for the air fry and hob modes. 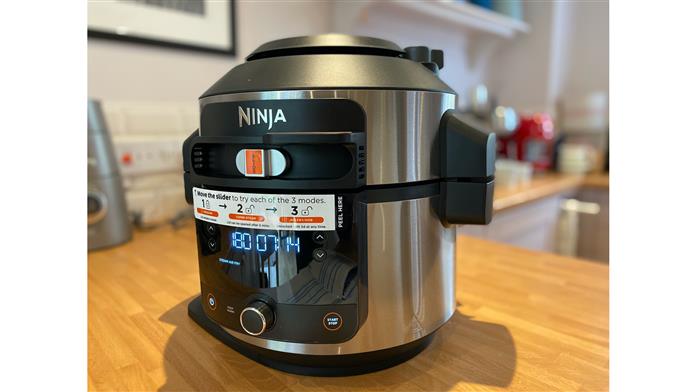 Each cooking mode brings up a different set of submenus on the interface directly below. So for instance, when you select the Combi-Steam function, it provides two type of cooking methods: Steam Air Fry and Steam Bake. The Air Fry/Hob mode presents an even wider variety of cooking methods – Air Fry, Grill, Bake, Dehydrate, Sear/Sauté, Steam Slow Cook and Yogurt, while the Pressure function locks the lid firmly and is only used for pressure cooking.

Each sub setting also allows you to change the default time and cooking temperature. I simply left everything on default and periodically lifted the lid to check how the food was going. Granted, it all seemed a bit confusing at first, but I stuck to the manual and made good use of the accompanying tip sheet and soon got the hang of it.

I should start by saying that I’m not a big fan of instant pots. At least I wasn’t until this clever bit of kit arrived. Unlike the Sage which has a specific rice setting that didn’t work at all for me, this model mentions nothing about rice in the manual which suggests the bods an Ninja are fully aware that pressure cooked rice almost always comes out of the pot in sticky clumps rather than pour-off-the-spoon flakiness. Hence, I stayed away from any rice dishes in my tests.

The first thing I tried was some chicken drumsticks using the supplied crisper basket and the Steam Air Fry option. I filled the base with 125ml water, seasoned some drumsticks with Nando’s extra hot rub and popped them in the basket. The first issue was that I could only fit five drumsticks in the basket without them touching each other. Of course, this would be no good for even two people let alone a family. But rest assured the basket will hold a whole 2KG chicken or similar weight in pork, beef, what have you. 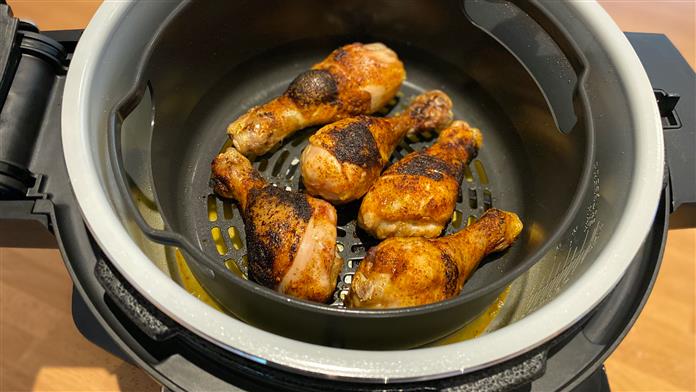 Mëin Gott, the chicken legs this cooker produced were on another planet

Anyway, back to the test. Apparently, it takes about 10 minutes for the steam to reach optimum temperature and at some point the heating element turns on to roast the chicken oven-style. After 15 minutes I took a peak and really didn’t expect what I saw – gorgeously browned chicken legs that looked like I’d prepared them on the Broil-King Regal 500pellet barbecue. After 25 minutes I took them out and, bingo, perfection in every way – moist, succulent meat and the crispiest skin I’ve ever produced. Yes, the Nando’s rub had burnt a bit but I like it like that. I was also impressed by the way it all shuts off when you lift the lid mid program and continues where it left off when you close the lid again.

I was so gobsmacked with the result of the chicken legs that I decided try the same bœuf bourguignon recipe I used for the Sage Fast Slow Go and I have no complaints whatsoever with the result. I’ve since steamed some dumplings, too, and they came out as I expected. I’ve also seen videos of cakes being produced by this do-it-all marvel and one day I might persuade my sceptical baking partner to give it a whirl. But in the meantime, I’ve been more than satisfied with how well this impressive tabletop cooker has worked, whether it’s pressure cooking, steaming or air frying. 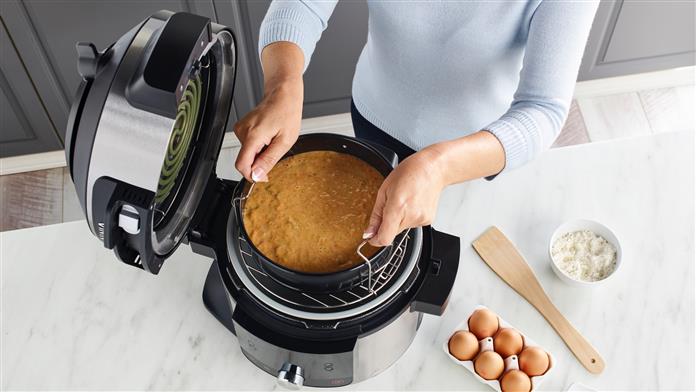 The Ninja Foodi 11-in-1 is perfect for producing larger-scale stews and smaller roast meats and vegetable dishes but its smallish internal dimensions do hinder its ability to cook for more than two or three people at a time. Yes, you could get away with feeding a family of four if serving a stew but a 2kg chicken won’t go very far – hell, I could demolish that alone.

The upshot is that I never thought I’d ever need a multi-cooker when I already have an electric oven and hob. But this thing has proved to be so practical, fast and easy to use – and with very little washing up in the process – that I think it may become a permanent fixture for quick-fix lunches, slow-cooked stews and even the occasional pressure-cooked vegetation. I can see it being especially well suited to soloists and couples and absolutely perfect for lodgers and caravan use. Try it once and you’ll likely become a convert.